Rising juniors, Stephanie Lehner and Daniel Gigliotti kicked off their summers by attending the Congress of Future Science and Technology Leaders from June 29 through July 1 in Cambridge, Massachusetts.

An initiative of the National Academy of Future Scientists and Technologists, students were invited based on their commitment to entering a STEM field, leadership potential and academic excellence. As delegates, Stephanie and Daniel were able to hear from outstanding college students who had won national science competitions and other inspirational people speak including Noble Prize winners. 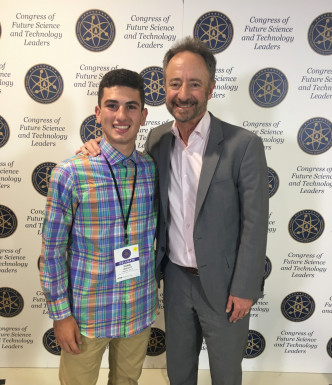 There were about thirty speakers at the Congress, and Stephanie mentions just a few that she was personally inspired by.  According to Stephanie, “Jay Hammonds, VIP Operations, Facebook and Sean Stephenson DCH, Speaker, Author, & Therapeutic Life Coach told personal stories of success where they persevered through difficulties when most people would have given up.  Sean Stephenson was one of my favorite speakers.  He spoke about surrounding yourself with empowering and respectful people. Through his inspirational and quite funny speech, he showed that no matter your circumstance you can always accomplish your goals. Others include Richard Browning (Founder and Chief Test Pilot, Gravity Industries, Ltd.),  Bo Eason (Author and Performer, “Runt of the Litter”) and Easton LaChappelle (Founder and CEO, Unlimited Tomorrow), and Scott Flansburgh (The Human Calculator).

For Daniel, it was Richard Rossi, the Master of Ceremonies, Founder and Director of the Congress who he found instrumental in his experience at this event. An aspiring engineer, Daniel comments, “He (Richard Rossi) was the most inspiring and influential person that ever stepped foot on that stage. He showed me that I am the future and will create greatness.”

In summing up their experiences, Daniel states, “The two things that I learned the most is that failure is good and it shows the true character of someone as they overcome that failure and create greatness.  Secondly, if you are passionate towards something follow that idea because it could lead into many other serendipitous ideas. It was a great time with great mentors and great fellow delegates.”

Stephanie remarks, “Going to the Congress was a life-changing experience. I not only learned different things from people who had great success in the fields of math, science, and technology but had some great laughs and heard some incredible stories from many of the speakers. I also met some very nice people who not only made the Congress a more fun experience but also people who I will keep in touch with in the future. I’m very appreciative of this opportunity. It was truly a once in a lifetime experience.”

At the end of the conference, Stephanie and Daniel were inducted into The Society of Torch & Laurel, which “is a high school honors program developed by The National Society of Collegiate Scholars to recognize high school high-achievers and provide them and their families with the vital tools to successfully transition to college.”