The Our Lady of Lourdes Girls Swim Team wrapped up their regular season competition Saturday, October 20th with spectacular performances and record-breaking swims.

In the first event of the League 2 Championship meet, Genevieve Bernhardt, Clare Bosse, Valerie Bubel, and Eleanor Bolander broke the OLL Girls Swim Team 200 Medley Relay record with a time of 154.77.  The following race, 200 Freestyle, resulted in personal bests for all three girls entered with Veronica Bernhardt, Margaret Bubel and Sarah Kannenberg each dropping approximately 2 seconds.  This trend continued with at least one personal best in every race.  Both Eleanor Bolander and Valerie Bubel took time off their 200 Individual Medley with Valerie qualifying outright for the Section 1 Championship meet.  In the 50 Freestyle, Amber Fisher shaved off 1.4 seconds and the 100 Fly yielded a career-best swim and another OLL Girls Swim Team record for Clare Bosse, at 58.84. Clare now owns seven out of eight individual records on our board. 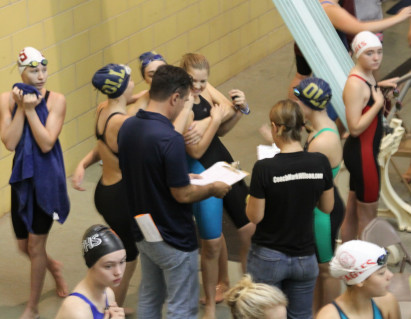 Gabriella Murray, Sarah Kannenberg dropped over 1 second each in the 100 Freestyle while Bridget McGuire took off a half second.  Mairead O’Donnell and Margaret Bubel each swam to personal best times in the 500 Freestyle by over 10 seconds and Marissa Santoro continued to improve her time by almost 4.5 seconds.  The success continued in the 100 Backstroke yielding best swims for all four swimmers.  Maggie Veach improved by almost 4 seconds, Gabriella Murray 3 seconds, Veronica Bernhardt 2 seconds and Genevieve Bernhardt one-half second. The 100 Breaststroke was no different with career bests for Maggie Veach and Daniella Murphy by approximately 1 second and a 3-second drop for Amber Fischer.

Leading off the 400 Free Relay, Valerie Bubel and Veronica Bernhardt each exceeded their previous best times.  Valerie Bubel received All-League recognition for her individual performance at the meet.

Coach Tom Bubel comments, “While hard work does not always promise success, it is the best way to prepare yourself to triumph.  The dedication and hard work of the swimmers and my coaching staff alike was commendable and unsurpassed.  I am looking forward to strong performances at the Section 1 Championship meet next week and then NYS Championships for at least one of our swimmers (Clare Bosse).  Then, of course, there is always next year!”