Recent Lourdes alumnus and Fordham University freshman Roberto Leito (OLL ’18) recently has been enlisted as a part-time social media coordinator for MangiPasta, a restaurant just off Arthur Avenue in the Bronx.

Having just opened its doors in August (around the same time Roberto arrived on campus), MangiPasta places on unsurprising emphasis on the most popular feature of Italian dining: pasta. 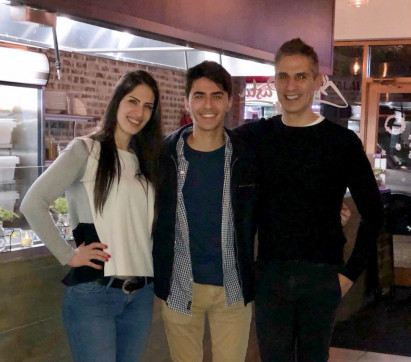 Roberto poses on a recent afternoon with the owners of MangiPasta,.Aurora Cerrato and Estevan Vargas.Along with her husband Estevan, head chef and owner Aurora Cerrato is committed to using only the freshest ingredients in her dishes. From the olive oil to the flour used to make pasta, everything is strictly local or imported from Italy. Prior to opening the restaurant, the couple even spent a few months in Italy selecting the ingredients that they would eventually use in their cuisine.

Having moved to the United States in 2009, Aurora brings a truly authentic Italian flair to her food. She and her loyal staff make nine different types of pasta combined with a plethora of flavorful sauces to match. With options ranging from classic pesto to carbonara, even more, dishes are set to be added to the menu. They even offer gluten-free and vegetarian options! Unlike many restaurants in the area, MangiPasta makes its own desserts from scratch, offering tiramisu’ and a chocolate cake with whipped cream.

Roberto came to the restaurant early on in the semester and fell in love with not only the food but MangiPasta itself. His great experience there led him to recommend the new establishment to countless numbers of his peers at Fordham. As these same people began to come to MangiPasta off his recommendation, he was asked if he wanted to help the business jumpstart its social media presence and help the owners develop a formulaic approach to posting. “It’s a local business, the food is phenomenal, and the owners are great people; that being said, why would someone not want to support them?” Roberto remarked. He’ll be working with MangiPasta to establish set social media posts so that the new restaurant can expand its client base. Facebook and Instagram will be their main focus, with an emphasis placed on highlighting the restaurant’s unique cuisine. He commented further “social media is such a powerful arm for promoting and informing, so I feel honored that they’ve entrusted me with helping them get started.”

Roberto traces his zeal for promotion and marketing to his time at Lourdes. As a senior, he spent a considerable amount of time working with the Development Office to promote OLL. He spoke to Catholic elementary schools, acted as a student liaison to prospective students and their parents, and even appeared on the radio to promote the open house in Fall 2017. “I loved promoting a school that gave me opportunities to advance not only my education but myself. In doing so, I realized that marketing is something I enjoy. Being a political science major, this is naturally in step with my interest in politics,” he says.

Check out MangiPasta on Facebook and Instagram to see what Roberto and the owners are up to!