It was at the age of nine that Lia’s love for softball began. Since then she has become an outstanding pitcher who works hard at her craft. This afternoon, surrounded by her family and friends, she signed her Letter of Intent to play Division II softball at Nyack College. 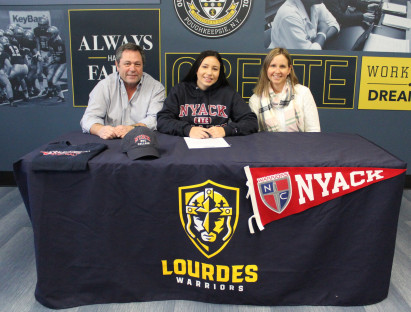 Lia poses with her parents, Doug and Jennifer after signing her Letter of Intent.Lia has received both an academic and athletic scholarship and decided Nyack was a great fit for her due to the beautiful environment and a great match with the team. As a Lourdes Warrior, we know she will fit in perfectly as a Nyack Warrior.

Currently, a senior, Lia, a Poughkeepsie resident, began her high school career on junior varsity and then moved to varsity for the remaining three years. In 2017 she was the Our Lady of Lourdes Rookie of the Year. In addition, while at Lourdes she also played varsity field hockey for four years.

Congratulations Lia on this next step in your athletic and academic career. We are proud to call you a Lourdean and a Warrior!