For Maeve, there was only one option that had it all. This afternoon Maeve signed to play lacrosse for Sacred Heart University. She had previously given them a verbal commitment during her junior year. 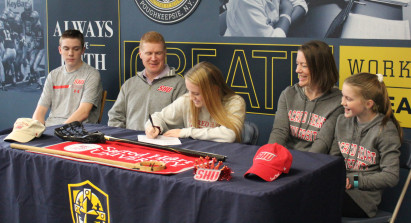 Maeve Connolly signs her National Letter of Intent to play for Sacred Heart University while her family looks on. Dad, Dan, Mom, Bridget, brother, Ryan and sister, Deirdre.Her interest began when she was touring campuses and Sacred Heart had the campus that she fell in love with. The school felt like an even better perfect fit once she met with the coaches and the other girls on the team. Lastly, the school offers the majors that she is interested in. Maeve is considering studying Occupational Therapy or Physical Therapy and has received both an academic and athletic scholarship. 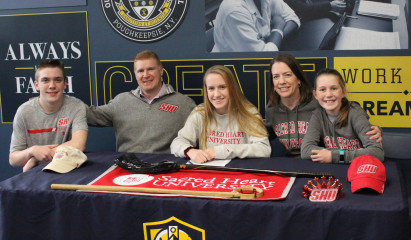 Maeve began to play lacrosse for the Dutchess Monarchs the summer of her 8th-grade year. She believes that lacrosse has expanded and grown a lot recently in the area. Maeve also helps contribute to the growth of the sport as well as sharing her passion by training a couple of other girls.

A four-year varsity player, Maeve earned All-League honors in 2017 and 2018, All-Section Honorable Mention in 2018, and was named to the Poughkeepsie Journal All-Stars and Hudson Valley Sports Report Dream Team in 2017 and 2018.  A two-year captain Maeve is one of five girls in the Lourdes lacrosse program who have scored 100 goals. She reached this goal her junior year by reaching 103 goals and plans to add to that this upcoming season. Maeve is also a two-sport athlete playing varsity soccer all four years at Lourdes.

Her greatest memory of playing for Lourdes is their loss by one point to Byram Hills in sectionals. Byram Hills was seeded much higher in the section so it was expected to be a tough game. Maeve scored six points during this game to try and help her team win. 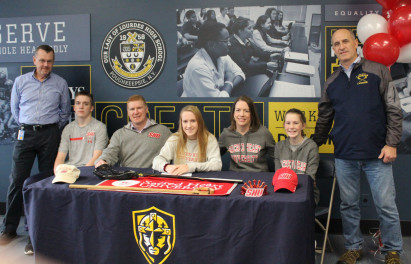 Maeve’s coach, Mike Galantich, speaks highly of Maeve stating, “Maeve has grown so much as a player and leader over the last three years. She was blessed with talent. She didn’t rest there, she continues to work hard each day to improve it and get better at her game, and lift others around her. She shares her talent readily and passes on her knowledge and legacy to other players. We are excited for Maeve and positive as she takes this next step at Sacred Heart University that she will continue to grow, succeed and contribute to her team and school in big ways.”

Maeve’s family and friends, her OLL teammates along with Lourdes Principal, Catherine Merryman, Athletic Director Bill Kyle, Coach Galantich and faculty members were all on hand for the signing to support and congratulate her. 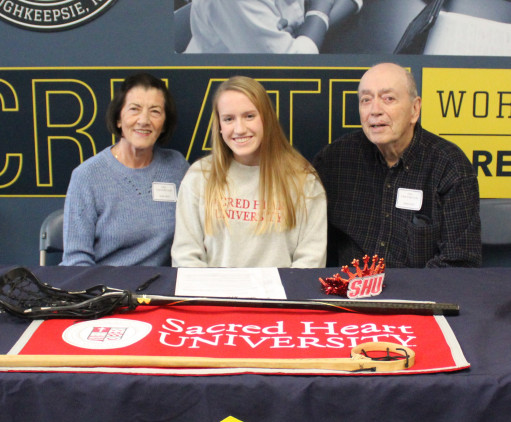 Maeve celebrates with her grandparents. 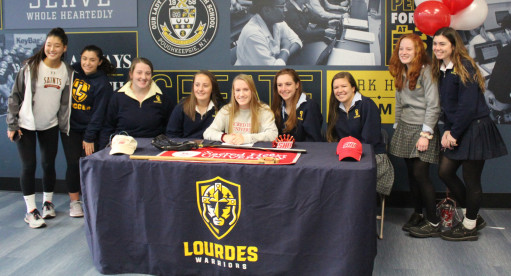 Maeve poses with her lacrosse teammates.