For Clare, swimming is in her blood. From her parents who met while coaching swimming at West Point to her brothers who both went on to swim at Division I colleges. This afternoon Clare signed her National Letter of Intent to swim at Xavier University next fall.

Clare Bosse signs her National Letter of Intent to swim for Xavier University while her parents, Sherri and Ray look on.She is excited to attend Xavier as it is a Division I swimming program in the Big East Conference, her meeting with the team met her expectations, and she has family who lives nearby. At Xavier, Clare plans to major in Business or Psychology, and she has received both an academic and athletic scholarship to attend. Her goal at Xavier is to swim in the NCAA Championships. 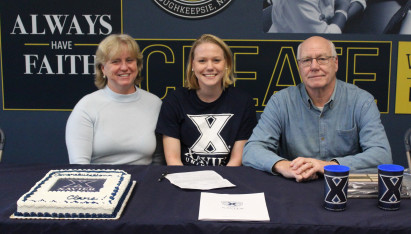 Clare Bosse celebrates her signing with her parents.

Clare began swimming when she was seven years old. At Lourdes, Clare has had a stellar career. She holds seven of the eight individual OLL team records in the 50 free, 100 free, 200 free, 500 free, 100 back, 100 butterfly, and 200 individual medley. She is also part of the 200 medley relay group who currently hold the OLL record. All four years at high school she qualified for states and was on the All-Section 1 Team, she is a six-time state finalist, eight-time Section 1 finalist, and a one-time Section 1 Champion. In addition, she has been on the All-League team for 3 years, an eight-time League finalist, and a three-time League Champion. She was named the OLL MVP in 9, 10, and 11th grades as well.

Clare has accomplished many amazing feats and not all at Lourdes. In addition, she also swims for the NY Sharks Aquatics located in Newburgh. At 12 she made it to the championship which is an impressive feat. In addition, she also holds four pool records at Poughkeepsie Middle School in the 100 and 200 freestyle, 100 breaststroke, and 200 individual medley.

While at school Clare did more than just swim. She is a member of the school band and plays the flute. She is also a member of the National Honor Society and is a finalist for the New York State Scholar-Athlete award. 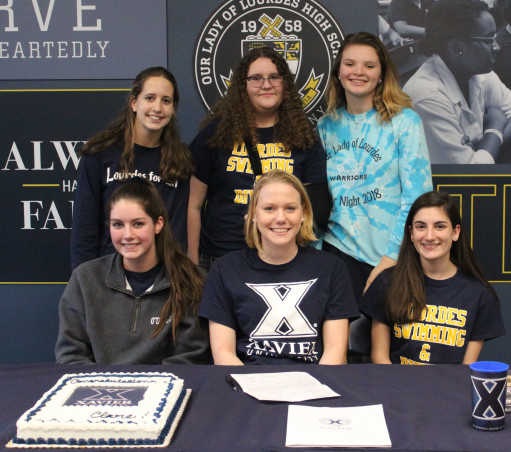 Several Lourdes Varsity swimmers were on hand for Clare's signing.