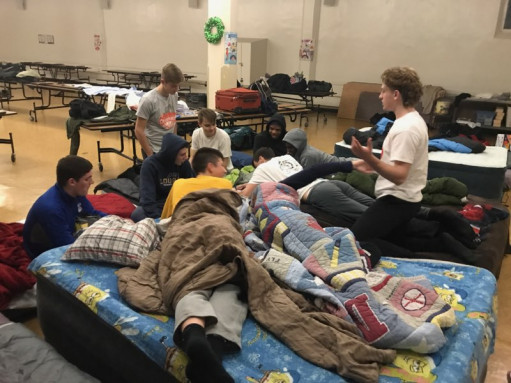 The team's home for the weekend in the basement of the Church of the Holy Family.In an annual event that began with Hurricane Sandy in 2012, the Lourdes Boys Varsity Basketball team spent this past weekend working on their community service project. The weekend begins with a study hall, team dinner, and their spending the evening on cots and air mattresses sleeping in the basement of the Church of the Holy Family in New Rochelle. Before they set out for the weekend, Varsity Head Coach Jim Santoro’s NO PHONES rule applies and he collects all phones that he holds onto all weekend and returns to them on Sunday evening.  According to Santoro, “This is a big factor in the success of the weekend. It takes about 30 minutes for them to adjust, then there is no sign that  phones even exist.”

On Saturday, their work with The Fuller Center for Housing began as they worked on turning an old 18th century Quaker church in Chappaqua into a two family home. According to their website, The Fuller Center for Housing “faith-driven and Christ-centered, promotes collaborative and innovative partnerships with individuals and organizations in an unrelenting quest to provide adequate shelter for all people in need worldwide.” The Fuller Center was founded in 2005 by Millard and Linda Fuller who previously founded Habitat for Humanity in 1976. Led by the center’s Executive Director, Jim Killoran, and project manager, Steve, the boys worked hard cutting and moving wood, working on the framing, building up the foundation of the house, and building the scaffolding outside the structure were the main components of the project. Some branched off and helped move trees and debris from a family’s yard where a tornado had recently run through. 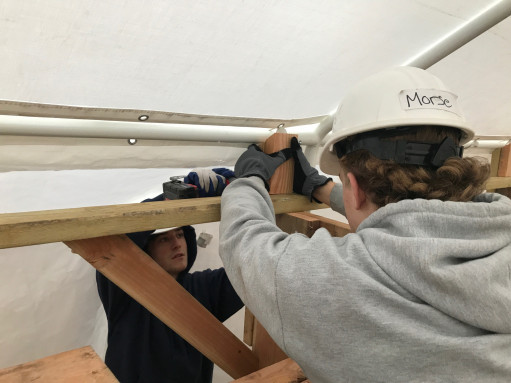 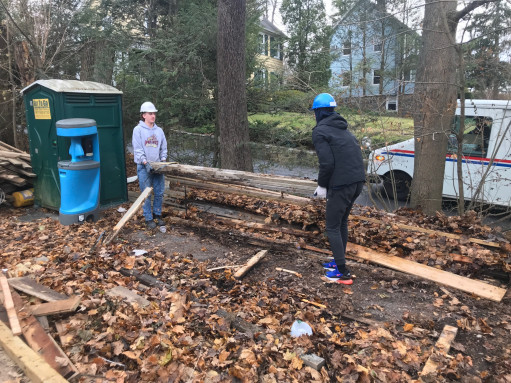 The benefits of this weekend are not just for the recipients of the team’s work, but for the team members as well.  Coach Santoro comments, “We do this because it is a good opportunity for our kids who come from all backgrounds, economically and socially, to learn about what others don’t have especially in times of tragedy, such as a hurricane. They learn that those occasions can put an already disadvantaged family in a worse position. For most of our kids, it is really the first time they have worked to help someone in need.”  In addition, while it might be easier to plan a project for the team closer to home, Coach Santoro indicates that decision is purposeful. “I want to put the kids in an uncomfortable situation, with parents and friends not around. Even visiting a restaurant they are not familiar with takes them out of their comfort zone so they have nothing lean on.”

After the workday on Saturday, the team attended Mass at the Church of the Holy Family, and had the opportunity for a shootaround at Iona College before another team dinner and heading off to bed for the evening.  On Sunday, they scrimmaged against Manhasset High School, Coach Santoro’s alma mater, which is another annual tradition.  When asked about the success of the weekend, Coach remarks, “It is unbelievable what they do. Each year, we have worked on many different projects, and regardless of what it is, all hands go in the air when we ask for volunteers.  Doesn’t matter the conditions.  It has snowed, rained, been uncomfortably cold, etc. the enthusiasm is contagious.”

“From a team perspective”, Coach Santoro adds, “they really and truly get to know each other instead of just being on a team together. We see the transformation on the ride down.  Everything is done together for 72 hours. The space we stayed in at the church is quite large and they put all their mattresses together, talking all night long. They could have spread out but chose to group together. They really get to know each other in a way that’s different, taking care of each other.”

Outstanding job team.  This is most definitely a valuable tradition for this program!

Lourdes Boys Varsity Basketball kicks off their season this Wednesday (12/5) at home against Lincoln High School at 6:15 pm. 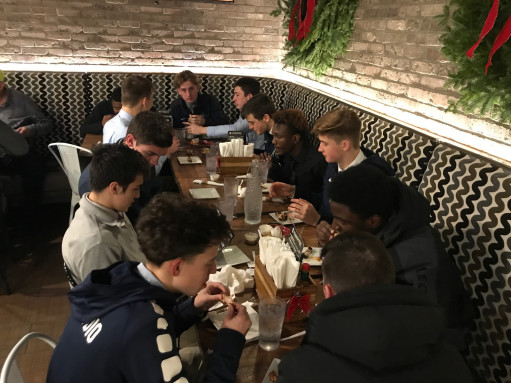 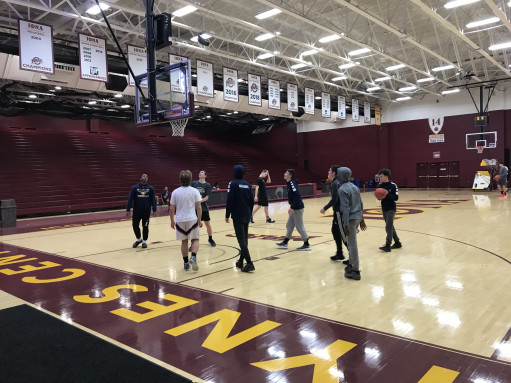 The team at their shootaround at Iona College.