Would it be Football or Track for Jaheim Jones? That would be the question on many people’s minds, including Jaheim’s, these past few months. After perusing several opportunities and working closely with his coaches, on Monday, March 4th, senior, Jaheim Jones made it official by signing his National Letter of Intent to run track at Kent State, a Division I school. 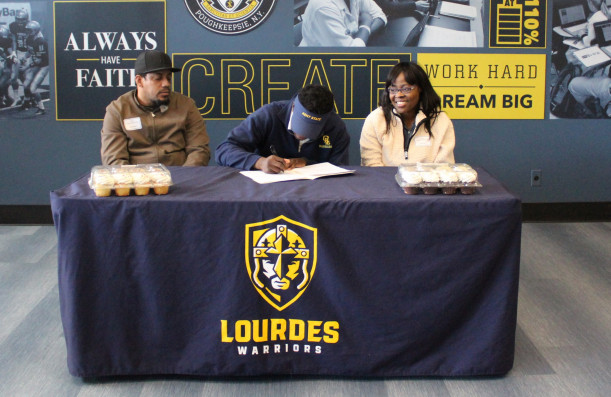 Jaheim signs his National Letter of Intent while his mother, Erica Springer, and stepfather, Kevin Thomas look on.

At Kent State, he is going in as an undecided major but is thinking about Business. He chose this school because he is receiving a full scholarship to attend, and after meeting the coaches he knew it was a great fit for him.  When asked if his goal was to run in the Olympics he said that if the opportunity arises he would, but his main focus is to receive an education.

When he arrived at Lourdes, Jahiem had planned to play three sports, football, basketball and track. He had played basketball and football a few times growing up and was interested in track to stay athletic. But during his freshman football season, he had pulled both of his hamstring muscles and was unable to be medically cleared in time for basketball tryouts. This made his track career begin earlier than planned, and his success as a sprinter was instantaneous that the first year winning the freshmen national title in the 100 meters.

While at Lourdes he played junior varsity football his freshman year and varsity football the remaining three years. In addition, he ran track all four years for the winter, spring, and summer seasons.  His favorite memory of playing sports at Lourdes was during his freshman year. It was his first touchdown of the season, he caught the ball off of a kickoff and he was surprised at how open he was to score. His favorite track memory is competing against Beacon. At the beginning of his time in high school Beacon’s team was strong and brought competition that Jaheim was looking for. 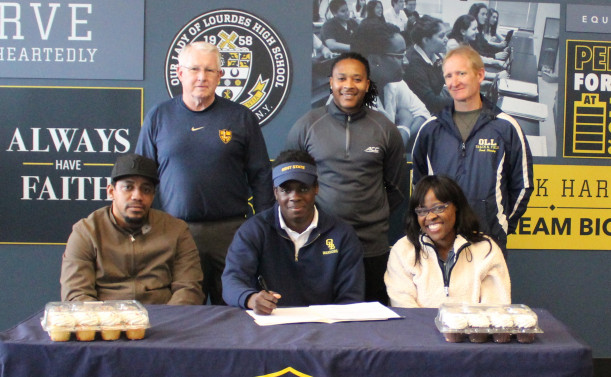 Jaheim has had a stellar athletic career at Lourdes in both track and football. Some of his track accolades include Section 1 Class B, 200 meter champion (21.34), Freshmen National 100 meter champ (10.8), Section 1 Class B indoors 300 meter champion (34.39), Northern County Champion 400 meters (49.89), Beacon Jump Fest sprint medley relay (3:37.80), League Champions 4x100 relay (44.78), Section 1 State Qualifying 4x400 relay (3:24.24), 112th Millrose Games 60 meter Dash (6.83 - 4th place). Lastly, at the Winter New York State championships this past weekend Jaheim placed second in the 55-meter run. His football accomplishments are impressive as well. During his junior season, he was All-League and All-Conference. His senior season he was All-League and All-Section. He finished his high school football career with 17 touchdowns, rushed 868 yards for an average of 8.1 yards per rush, caught 20 passes for 370 yards, scored a touchdown on a 65-yard kickoff return and another on a 95-yard interception return.

“I am truly impressed with Jaheim’s athletic talent and most struck by his humbleness,” remarked Lourdes Head Football Coach Brian Walsh.  “His remarkable talent is rare, and he always kept his head and priorities in order.  Jaheim is a true team player and I am thrilled that he has this opportunity to continue to move on to do more great things athletically.”

Lourdes Varsity Track & Field Coach, Mike Slinskey reiterated those feelings, commenting, “These four years of working with Jaheim have been a pleasure.  He’s naturally gifted and honing in on his talent was very rewarding.  I learned a lot from working with Jaheim, and Kent is truly lucky to have him.”

Jaheim’s family and friends, his OLL friends and teammates along with Lourdes Principal, Catherine Merryman, Coaches Walsh and Slinskey and numerous faculty members were all on hand for the signing to support and congratulate him. 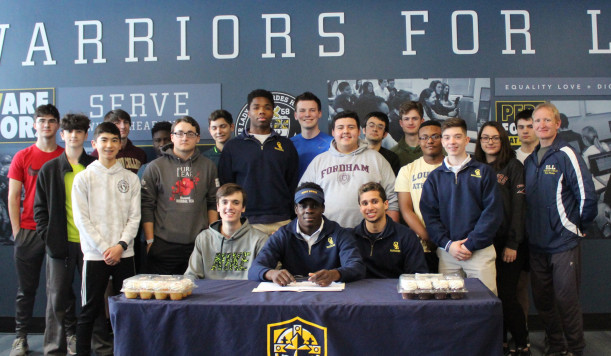 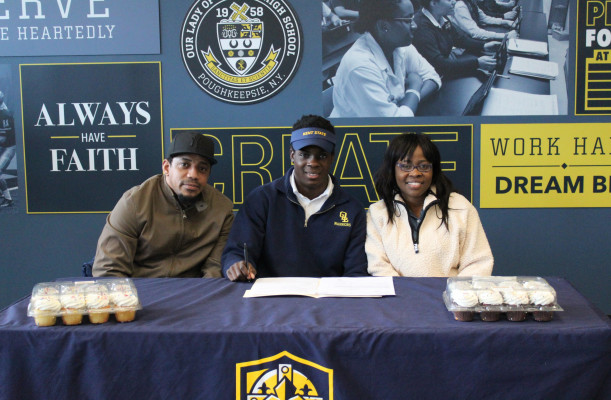 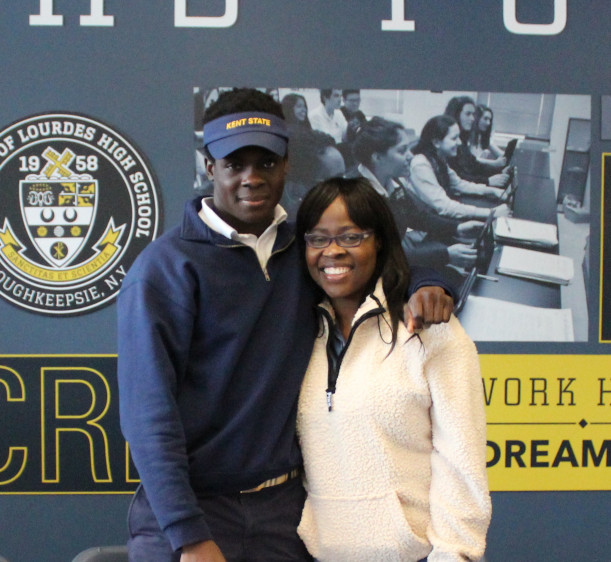