The Our Lady of Lourdes robotics team, WarriorBots, made it to the VEX EDR State Championship for the second time in the two years they have competed as a team.

The students woke up in the early morning hours and drove two hours away in a snowstorm to arrive at the East Rockaway Jr/Sr High School by 8 AM this past Saturday morning. While they did not win the championship, they were praised by judges and teams alike for their original designs. Geneva Ng implemented a chassis design that afforded them a greater break over angle allowing them to easily climb onto platforms. Ethan Noto developed a ball launcher that was capable of hitting targets from 10 feet away. This ball launcher was loaded with Ethan’s and Jason Kozak’s dual purpose mechanism that not only placed balls into the firing chamber but also served to flipped caps requiring only one motor of the maximum eight that could be used. 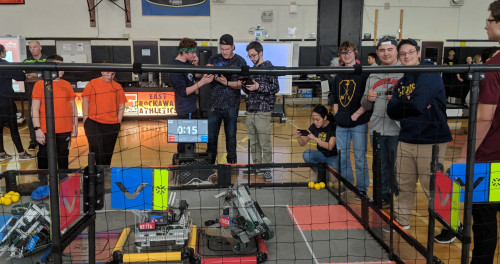 A look at the competition field

Overall in the season, the team tied for 12th place in the programming skills attempts category out of 147 teams in the New York region. In this category, students must write code using C++ with VEX specific libraries to autonomously drive the robot and score as many points in 15 seconds. Theodore Friedrich was the lead software engineer on the team who wrote several of his own classes and methods to accomplish this task. In the competitions, the robot will be assigned one of two team colors playing on opposite sides of the field and therefore would have to invert its actions depending upon which color the team was assigned for each match. There is often only a few minutes between matches so Theodore decided to create UI buttons on the robot’s touchable screen that allowed him to quickly select where the robot would be located and whether it would drive on the platform or not allowing it to stay out of the way of a teammates robot if they also were attempting to drive on the platform. This design decision meant that the team could quickly adjust how the robot would perform without having to upload modified code each time. 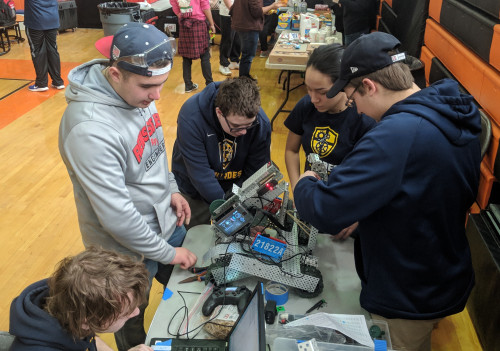 WarriorBots working on their robot

The pit crew, consisting of Jason Kozak, Geneva Ng, and Brian Sayah, helped to keep the robot in working order as it took and gave beatings throughout the day. They also played an important role by observing the abilities and shortcomings of other robots in order to provide Ethan, the driver, with strategies that he might use to win matches.

This team was very successful and the team can’t wait until next year’s tournament is announced in May so that they can get to work designing and planning!