This past winter sports season Our Lady of Lourdes had four students go the State Championships, one in track, one in wrestling, and two in swimming.

Jaheim Jones (senior - Indoor Track): Finished second in the 55-meter sprint with a time of 6:45 seconds. He also qualified in the 300-meter but he was unable to race due to an injury. 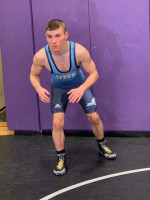 Christopher DiMeglio (senior - Wrestling): One of less than 400 wrestlers that qualified to be at states of the 13,000 students that started high school wrestling season in New York. Chris is the 2019 Section One Champion in the 113 lb weight class.

From left to right: Jason Cruz and Michael Faughnan

Michael Faughnan (junior - Swimming): For his state breakout year he placed 44th in the state for the 200-meter freestyle.

It is an impressive accomplishment to qualify for states and the Lourdes community is very proud of these athletes. Go Warriors!