By finding faith, peace, and hope Immaculée Ilibagiza was able to survive the unthinkable. On Tuesday afternoon, Our Lady of Lourdes High School students had the privilege to hear Immaculée Ilibagiza, a Rwandan genocide survivor, speak during a schoolwide assembly about her experiences and how her faith in God has greatly impacted and helped her to succeed. 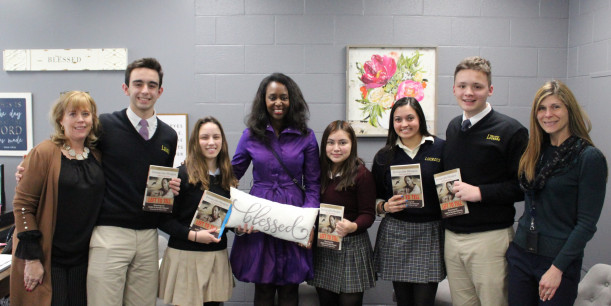 Immaculée’s first book, Left to Tell; Discovering God Amidst the Rwandan Holocaust (Hay House) was released in March of 2006.

On April 6, 1994, the assassination of the Rwandan President who was part of the Hutu tribe sparked months of massacres of the Tutsi tribe. Being the only daughter of her family, her father sent her to hide at a local pastor’s house for protection. She had to hide in a 3 x 4 foot bathroom with seven other women for 91 days. When she was able to come out of hiding she was only 65 pounds and her entire family, besides one brother who was abroad at the time, were brutally murdered along with nearly a million other people. It was while Immaculée was in hiding that she turned to prayer, and it was through her faith that she was ultimately able to do the impossible and tell her family’s murderer that she forgave him.

During the assembly, Immaculée impressed upon the students the power of love and prayer as the biggest lesson and greatest commitment.  “God is present even in the worst situations,” she states.  “When people have faith, they can have hope. Open your heart to people for who they are, because you never know how God may appear to you. Be grateful, especially to the people in your life.” Immaculée also talked a great deal about forgiveness and being able to forgive her family’s killer.  “It’s hard to understand forgiveness, it’s not hard to forgive.”

Mrs. Merryman’s Religion 10 class spent the last month reading Left to Tell analyzing the autobiography for theme, point of view and its rich symbolism. Immaculée came to life for these students long before she took the stage in OLL’s Arts & Athletic Center,” remarked Mrs. Merryman. “Immaculée reminds us that there is nothing, absolutely nothing in life so insurmountable that prayer cannot set right again.”

Sophomore, Robert Polidoro commented, “Immaculee’s experience was indescribable as you cannot imagine someone going through that. It was a true nightmare for her and then so inspiring to see how strong she came out of it. The book was difficult to read painting such vivid pictures of true animosity involving guns and killing. Meeting her really opened up how I look at the book.”

Michelle Herrera, also a sophomore agrees stating, “It was an eye-opener to faith and bonds with family.”

According to her website (www.immaculee.com), Left to Tell has received a Christopher Award “affirming the highest values of human spirit,” and was chosen as Outreach Magazine’s selection for “Best Outreach Testimony/Biography Resource of 2007.” Left to Tell has been adopted into the curriculum of dozens of high schools and universities, including Villanova University, which selected it for their “One Book Program,” making Left to Tell mandatory reading for its 6,000 students.

Immaculée has written six additional books in recent years - Led by Faith: Rising from the Ashes of the Rwandan Genocide, Our Lady of Kibeho, If Only We Had Listened, Visit from Heaven, and The Boy Who Met Jesus, and The Rosary.