“From mentally preparing to the medal stand,” is how Lourdes Varsity Track & Field coach Mike Slinskey describes this past weekend’s accomplishments of his team at the New York State Track & Field Championships. 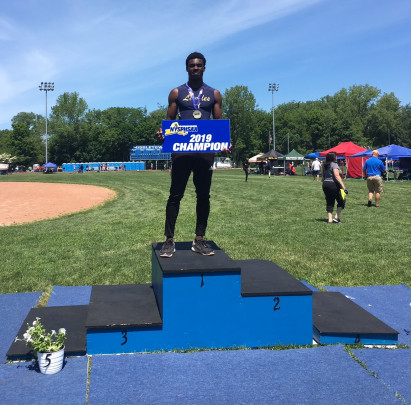 On the second day of competition, it was the Jaheim Jones show.  According to Slinskey, “After running a 47-second quarter mile, and the 100 & 200-meter trials on the first day, Jaheim returned on Saturday for the finals in both. And just for the extra grind, the Federation 100 & 200 at the end of everything. Not only did he win each event. Jaheim broke his own school record TWICE!!

Nearly breaking 21secs in the final 200, running 21.13 secs.
Mentally exhausted going into the finals. I told him, don’t worry about time, give me your best effort & I’ll keep my fingers crossed. So he walked away with a perfect record. Nicely done.”

A very proud Coach Slinskey best sums up the weekend commenting, “We made New York State take note that Our Lady of Lourdes is a force to be seen!”