On December 18, 2019, Master Storyteller Jonathan Kruk presented A Christmas Carol to the junior class. Students and faculty in attendance were enthralled by his energetic, riveting one-man show of the Charles Dickens’ classic. 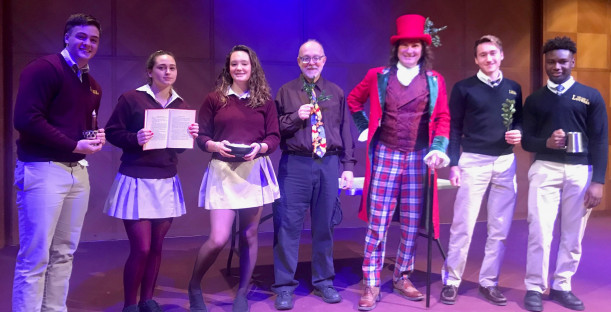 Students and accompanist, Tom McCoy pose with Jonathan Kruk after the show.

Jonathan Kruk has enjoyed a full-time career as a professional storyteller since 1989. He has a degree in English from Holy Cross and a Master’s degree in Educational Theater from NYU. Mr. Kruk has been performing solo shows of The Legend of Sleepy Hollow and A Christmas Carol for Historic Hudson Valley since 2010. His eight recordings earned Parent’s Choice and N.A.P.P.A  honors award. CBS Sunday Morning featured him in a piece on the American storytelling movement. He was selected “Best Storyteller” in the Hudson Valley and presented with a citizens medal by the National Sons of the American Revolution. He performs at schools, historic sites, libraries, and other venues. Mr. Kruk is the author of Legends and Lore of Sleepy Hollow and the Hudson Valley and Legends and Lore of the Hudson Highlands History Press folklore books for adults. He has also been featured on ABC Good Morning America, the BBC, the National Geographic Channel, the Travel Channel, radio WHUD, and WAMC.

The live music for the show was provided by Tom McCoy who also has an impressive list of credentials, including performing with Ray Charles, James Taylor, and Judy Collins. Jonathan Kruk will be returning to Our Lady of Lourdes in February to perform an American Literature program for the sophomore class. 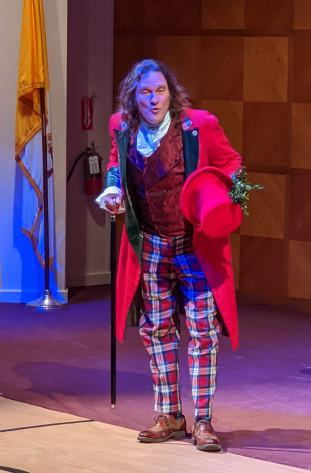