On February 5, 2020, Master Storyteller Jonathan Kruk returned to Our Lady of Lourdes High School to present an American literature program to the sophomore class and the College Public Speaking class. 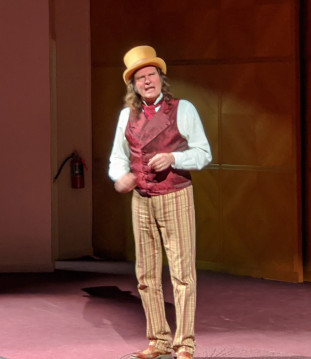 The entire audience was captivated by Jonathan Kruk’s vivid, engaging interpretation of American literary greats like Washington Irving, Nathaniel Hawthorne, Edgar Allan Poe, Sarah Orne Jewett, and Mark Twain.  The sophomores have been familiarizing themselves with these authors in class this year, so seeing the tales brought to life on stage was a special delight for them.

“I enjoyed Mr. Kruk’s storytelling because his unique voice filled the entire auditorium, and he incredibly depicted the stories he told only through his voice and a few hand gestures!”
–Marina Bellizzi

“Mr. Kruk was very passionate about each character he played.  He transferred the emotions and energy to the audience and conveyed the messages from each story perfectly.”
–Hope Campbell

“Jonathan Kruk’s performance helped emphasize the importance of diction in stories and showed that each word can have an effect on the audience.”
–Edward Horgan

“It was a great experience; I did not want to stop hearing those stories.”
–Delaney Idema

“Mr. Kruk brought the stories to life with enthusiasm and passion, and he gave me a new appreciation of the literature.”
–Jackie Lehner 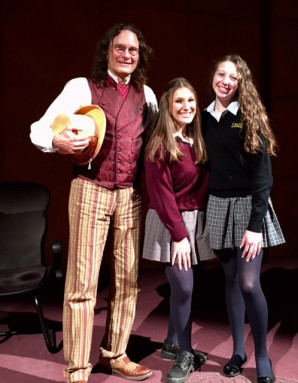 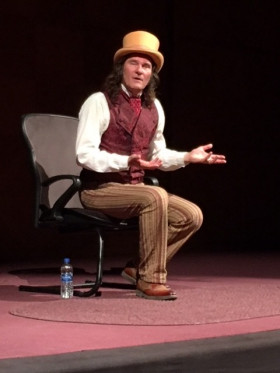 Jonathan Kruk has enjoyed a full-time career as a professional storyteller since 1989.  He has a degree in English from Holy Cross and a Master’s degree in Educational Theater from NYU. Mr. Kruk has been performing solo shows of “The Legend of Sleepy Hollow” and “A Christmas Carol” for Historic Hudson Valley since 2010. His eight recordings earned Parent’s Choice and N.A.P.P.A honors awards. “CBS Sunday Morning” featured him in a piece on the American storytelling movement. He was selected “Best Storyteller” in the Hudson Valley and presented with a citizens medal by the National Sons of the American Revolution. He performs at schools, historic sites, libraries and other venues. Mr. Kruk is the author of “Legends and Lore of Sleepy Hollow and the Hudson Valley” and “Legends and Lore of the Hudson Highlands” History Press folklore books for adults. He has also been featured on ABC Good Morning America, the BBC, the National Geographic Channel, the Travel Channel, radio WHUD, and WAMC.  You can find out more about his performances by visiting his website: www.jonathankruk.com

Last modified on Mar. 24th at 2:11pm by Christine Kolosky.