It is with deep sadness that we share the passing of William Dillon, a beloved member of the OLL community. 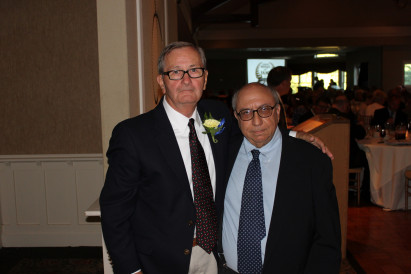 Coaches Bill Dillon and Brian Tervenski at the OLL Athletic Hall of Fame in September 2012.A football coach for 40 years, Coach Dillon coached at Lourdes under Dick Beams in 1976, Brian Tervenski in 1977 and 1978, and then with Lourdes alumnus Mike Malet ’66 at Marist College in 1979 and 1980. In 1981 he returned to Lourdes as Varsity Football Offensive Coach until he became the head coach at Arlington High School in 1987. In 2012, he returned to celebrate with the Lourdes community his induction into the OLL Athletic Hall of Fame alongside good friend and fellow coach, Brian Tervenski. To quote a passage from his message at the 2012 event, Coach Dillon stated, “I will always remember my coaching years at Lourdes as a special part of my coaching career. As I told the players in 1986 when I was leaving to become the head coach at Arlington, there is something special about Lourdes. To all of the young men who played for Coach Tervenski and me, thank you for always doing your best.” His most notable experiences as a coach at Lourdes include three Section One Bowl Game victories, an undefeated 1985 season and he was most known for his unusual formations and extra point set-ups.
Coach Dillon is survived by his wife, Susan, a son, Michael Dillon, and his wife, Jennifer; two daughters, Jennifer Cmil and her husband, Alexander, and Laura Dillon and her husband, Dana Pavelock; two grandchildren, and two step-grandchildren.
Please pray for the repose of his soul. He will be missed by all those who knew and loved him.
A celebration of his life is planned for the spring or summer and will be announced.
Please click here for Coach Dillon’s obituary.
Memorial donations may be made to Arlington Education Foundation (with “The Bill Dillon Scholarship” on the check memo line), 144 Todd Hill Road, Lagrangeville, NY 12540. Donations can be made online at, https://www.arlingtonschools.org/Page/21828
Last modified on Jan. 28th, 2021 at 8:30am by Christine Kolosky.