Lady Warriors Esther Roman ’17 and Lydia Vigne ’20  reconnected in the fall of 2020 in a new setting with new roles but a similar story.

Both young ladies were top-notch students at Lourdes with the goal of becoming cadets at the prestigious United States Military Academy at West Point. Both rigorously trained physically and academically and made Lourdes history by becoming the first (Esther) and second (Lydia), female Lourdeans to attend West Point. The girls took some time to visit OLL during their winter break and shared some of their experiences and insights on being a West Point cadet. 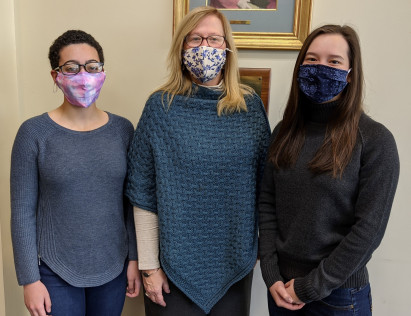 Lydia Vigne '20 (left), and Esther Roman '17 (right) pose with Mrs. Merryman (center) on a recent visit to the school.Life for Lydia as a first-year cadet, known as a plebe, has been a challenging time of transition, made even more difficult with the restrictions mandated by Covid-19. Luckily her mentor was a familiar face since Esther was assigned the task of assimilating Lydia into the West Point culture.

A topic that made them both animated and perhaps wince a little, was rucking.  Rucking, which is walking for miles on the massive hills on campus with a very heavy backpack can be considered a metaphor for transitioning into the world of a military academy. As a seasoned and conditioned veteran of rucking, Esther assured Lydia that it gets easier and that once you believe you can do it, you can do it.

Additional advice for anyone considering attending the military academy is a reminder that becoming a West Point cadet means you are in the army, but they stressed, it doesn’t have to be a lifetime commitment. It is a great privilege and women especially should be reminded that they have these opportunities. The academy affords their cadets an exceptional education and a job at the end of their studies with the choice to continue on the path of remaining in the military after they serve a minimum of eight years in a combination of Active Duty and Reserve Component Service.

We salute you, Esther and Lydia. Thank you for your service and for making your Lourdes family proud!