It was in third grade that Joseph Krauza’s love for football began. Since then the Our Lady of Lourdes High School senior has become a key player who works hard on and off the field. This afternoon, Joseph signed his Letter of Intent to play Division II football for Assumption University in Worcester, Massachusetts 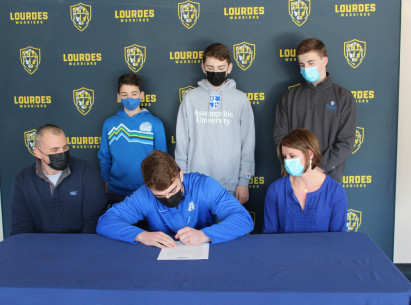 Joe Krauza signs his National Letter of Intent as his parents, Connie and Andrew, and brothers Matthew, Andrew and James look on.

It was in third grade that Joseph Krauza’s love for football began. He started his career playing with the Southern Dutchess Patriots as a linebacker, and it was there that he realized his passion for defense. Since then the Our Lady of Lourdes High School senior has become a key player who works hard on and off the field. This afternoon, Joseph signed his Letter of Intent to play Division II football for Assumption University in Worcester, Massachusetts.

While Joseph is an outstanding football player, he is also a standout in wrestling and lacrosse. After playing youth lacrosse for many years with the Wappingers Warriors, Joseph moved on to playing with 845Lax, a local competitive travel lacrosse team, while also playing for Lourdes. During his high school career, he was named All-League for wrestling as a freshman, sophomore, and junior, and was awarded All-Section for wrestling his junior year. Last year, he competed at the State tournament in Albany alongside two OLL teammates and was named MVP of the Lourdes wrestling team. Another milestone during his junior year included being awarded Most Improved Defensive player for Lourdes football. In addition to playing three varsity sports at Lourdes, Joseph is a member of the National Honor Society.

Joseph shared some of his favorite moments during his career at Our Lady of Lourdes High School, “If I were to choose a favorite, it would have to be the football game against Yorktown my sophomore year,” he said. “I remember we were at Yorktown, it was their Homecoming, and there were so many fans. We won by 2.  It was such a great game, and a great feeling to win against a very good team.” It was hard for Joseph to choose just one memory, “A close second favorite was the send-off Lourdes gave the student-athletes participating in NY State competitions last year. The students and faculty lined the hallways and cheered for us as we boarded the bus for Albany. That is a cool memory.”

Joseph answered honestly when asked how COVID-19 has affected his athletic career. “Obviously COVID-19 is hard for everyone and I understand the necessary limits it puts on school and sports but it has been disappointing to miss out on some of the exciting things I looked forward to as a senior…games, homecoming, hanging out with friends.” In regards to COVID-19 and planning his future he said, “It was also a stumbling block for recruiting because it eliminated my fall senior year of football, limiting the film I could provide to coaches. I am bigger and faster than I was in junior year, so I was looking forward to showcasing that. I was also looking forward to playing one last season with my friends and teammates. My brother Matthew was going to play Varsity, and I was excited to play with him too.” But Joseph stayed focused and patient and continued to work out with his brother at Velocity Sports Performance with help from Lourdes alumnus Jordan Bledsoe in preparation for his future.

The campus at Assumption University sparked Joseph’s love for the school. He shared that Coach Chris Keevins helped connect him with various schools and college coaches, but he is very happy with his decision to attend and play at Assumption University. “It’s only a few hours from home so my family and friends can come to games. I feel the coaching staff and my new teammates will push me to become the best player that I can possibly be,” he shared. “I am confident that I can make a difference on the team from day one. Academically, I was impressed by the attention given to each student, particularly each student-athlete. The staff stressed that their focus is to help me develop into the best man I can be.” 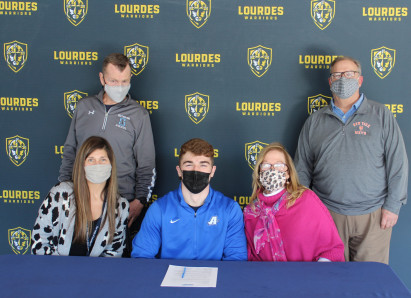 Joe Krauza celebrates his signing with Lourdes Principal, Catherine Merryman, Assistant Principals Meghan Vilardo and Michael Krieger, and Lourdes Athletic Director Bill Kyle.Joseph expressed that he would not be where he is today without the constant love and support from his family, especially his parents and brothers Matthew, Andrew, and James, his great friends at Lourdes, and the guidance and aid from his coaches and teachers. “My dad was my first coach and I was lucky enough to be coached by him until I came to Lourdes. His coaching on and off the field has helped prepare me for this next great opportunity,” he said. Joseph would like to give a special thank you to Coach Walsh, Coach Keenan, Coach Holze, Coach McHale, Coach Heunis, Coach Malet, Coach Mohammed, Coach Finn, Our Lady of Lourdes Assistant Athletic Director Miles Hansen, and Jordan Bledsoe for helping him reach his goals. 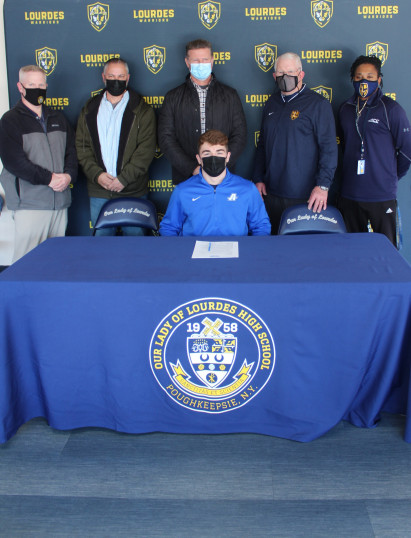 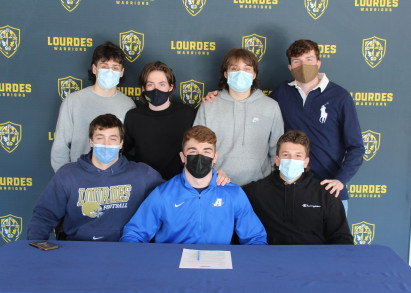 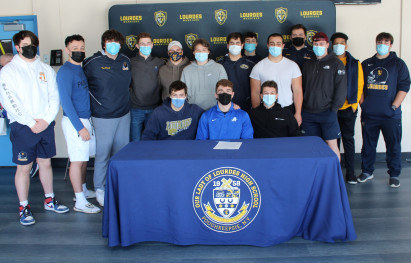