A special moment was shared this afternoon in honor of Lourdes Varsity Football Coach Brian Walsh. 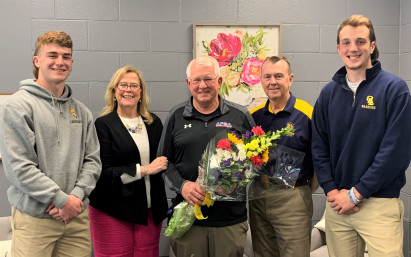 From left to right: Senior Joe Krauza, Mrs. Catherine Merryman, Coach Walsh, Mr. Bill Kyle, and Brandon Jorgensen.As was announced earlier this year, Coach Walsh is stepping down from his coaching responsibilities here at Lourdes after more than a decade. With two of his players in attendance, Mrs. Merryman, Mr. Kyle, Mrs. Vilardo, and Mr. Hansen paid tribute and thanked him for his time, talent, and dedication to the Lourdes football and overall athletic programs.

During his years here Coach Walsh led the Lourdes football program to three Section One titles and a memorable state championship appearance. In her remarks, Mrs. Merryman praised Coach, “You are one of the best high school football coaches but you are even a better man. The character of the man you are has changed lives so God certainly works through you, Brian Walsh.”

May God Bless you, Coach!  Lourdes will miss you and we wish you all the best in your next chapter!

Coach Walsh poses with the 2015 Lourdes football team after their sectional win.